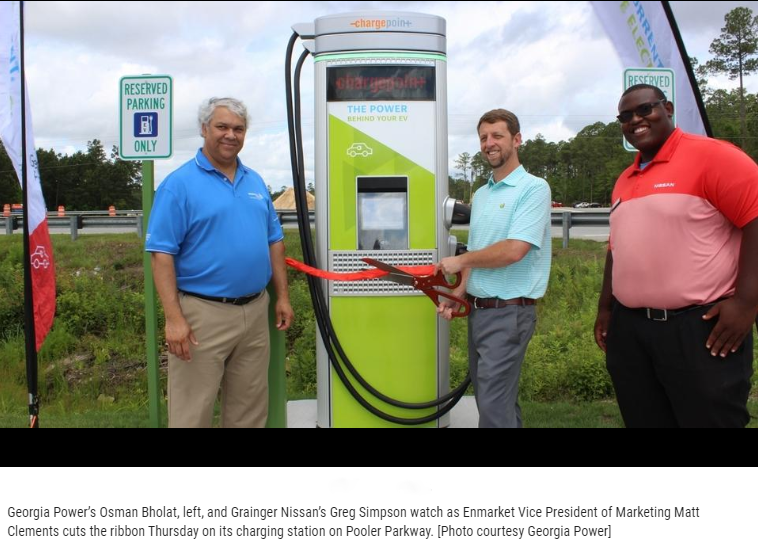 Local gas stations are evolving to cater to electric vehicles.

Last week officials from Georgia Power and Enmarket cut the ribbon on a new electric vehicle charging station at the Enmarket at 1601 Pooler Parkway in Pooler. About five miles away, Parker’s was the first in the area to add charging to a gas station, with Georgia Power installing one at its 1601 Dean Forest Road store last year. Farther west on I-16, Parker’s Metter location also features an EV charging station, installed in 2017.

Georgia Power Spokesperson Ashley West said the charging island is part of Georgia Power’s development of public charging infrastructure, including dozens of charging locations throughout the state. The Enmarket location features a DC fast charger (CHADeMo/SAE combo plugs) that can provide about 100 miles of range per hour at a cost to the user of $15 an hour. The Parker’s location hosts two fast chargers that add range at that same rate and charge the same price. It also features two slower “Level 2” chargers that add about 25 miles of range per hour and are free to use.

For Georgia Power, the business opportunity is clear: supporting an emerging market for electricity. The company is touting Georgia as an “EV-friendly state.” In addition to developing public charging infrastructure, Georgia Power also offers EV charger rebates for business and residential customers, an online calculator to help customers find out how much driving electric may save them and a special time-of-use rate that makes it cheaper to recharge vehicles overnight at home.

The public charging stations used most often are those with quick access to the highway and something for drivers to do for the time they’re charging, said Brad Norman, Georgia Power’s electric transportation market specialist. That’s why gas stations are a good fit. He expects to see more gas stations adding chargers.

For the gas stations that have partnered with Georgia Power, installing chargers is a way to lure customers into their convenience stores.

“The attraction for us is the time it takes,” said Enmarket Vice President of Marketing Matt Clements.

Charging a vehicle even with a quick charger can take 15 to 30 minutes. That leaves time for the driver to buy coffee, snacks, or a meal in the convenience store, where margins are fatter than those on fuel.

“As there are more and more EVs on the road we want to be prepared to cater to that consumer,” Clements said. “We see it as an opportunity for growth going forward.”

So does Parker’s President Jeff Bush.

“At Parker’s, we’re committed to meeting the changing energy needs of our customers,” Bush said. “We want to anticipate future technology needs and are already planning on expanding our EV charging network in the future. We look forward to making an announcement in the coming months.”

Electric vehicles made up about 1 percent of vehicle sales in the U.S. last year but are predicted to increase in popularity. Some car makers are planning to phase out gas and diesel-powered vehicles and go all-electric over the next decade or so. Volkswagen announced it will do so by 2026.

Georgia ranked 14th last year in EV sales, with 6,004 plug-in hybrid and battery electric vehicles bought in the state. Once a leader in electric vehicle adoption, Georgia lawmakers in 2015 repealed a generous $5,000 state tax credit for EV buyers while at the same time imposing a $200 a year “road tax” on them. Twenty-four states have imposed such EV registration taxes to recoup lost gasoline taxes, but Georgia’s fee is tied with Arkansas, Ohio and Alabama as the highest.

A recent survey by AAA attributes a lack of knowledge and experience to the relatively slow adoption of electric vehicles. Still, 40 million Americans said they would be likely to consider an electric vehicle for their next car purchase, with millennials leading the pack. Concern for the environment and lower long-term costs were cited as the leading reasons to go buy an EV (74 percent and 56 percent respectively).

Holding drivers back was a lack of understanding of EV performance. For example, electric vehicles, unlike those running on gas, do better in stop and go traffic because the car can recapture energy to charge the battery when braking. However, AAA’s survey found that a majority of Americans (59 percent) were unsure of whether electric vehicles have better range when driving at highways speeds or city traffic.

Posted in In the News and tagged charging station, electric vehicles, EV market
← Community Service – EnmarketSean Fatzinger of Enmarket Named to Board of Trustees for The Leukemia & Lymphoma Society Georgia Chapter →