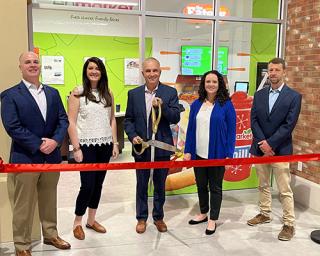 SAVANNAH, Ga. — Enmarket held a special ribbon-cutting ceremony for its most unique convenience store yet earlier in March. The ceremony commemorated the opening of the convenience store operator's storefront inside the Junior Achievement Colonial Group Discovery Center at the Armstrong campus of Georgia Southern University.

This new facility is a realistic facsimile of a regular Enmarket convenience store but will serve more as a classroom than a retail store, according to the operator. Middle school students who are participating in the Junior Achievement programs JA Finance Park and JA BizTown will get hands-on experience in how the business world operates at the site.

The opening of the center expands Junior Achievement programming access to a total of 15,000 middle school students in coastal Georgia.

"Enmarket is excited to take part in this experiential education initiative with Junior Achievement," said Brett Giesick, president of Enmarket. "We especially like that the Discovery Center will serve students from multiple counties, just as our stores cover much of the region."

Enmarket, which is the largest chain in its hometown city of Savannah, is one of 29 other business entities represented as part of the Discovery Center, reflecting the commitment of participating businesses to Junior Achievement's particular brand of experience-based business education.

Upon arrival at the Discovery Center, participating middle school students become part of a simulated version of their hometown, where they work with their peers as well as adult volunteers to develop a greater understanding of business and financial concepts, and encourage an entrepreneurial spirit. The Colonial Group Discovery Center is the fifth such center in the state of Georgia. Upon its opening, 44 percent of the middle schools in the state have access to these assets.

Enmarket's past efforts to support the communities in which it operates and their local schools include sponsoring a coalition of local businesses that donated 51,000 reusable 20-ounce translucent water bottles to students in Savannah-Chatham and Effingham County public schools.

Aside from the storefront in the Discovery Center, Enmarket operates 10 convenience stores in Savannah and 63 stores in the Savannah designated market area. The city will also serve as the host site for Convenience Store News' 2022 Convenience Foodservice Exchange event, which will include the chain's foodservice director, Ryan Krebs, among its panel speakers.

"We're extremely excited about the future for Enmarket in Savannah," Giesick told Convenience Store News. "The population influx and logistics boom in the area will support new store growth for many years to come. We continue to look for ways to diversify our services and offerings, including but not limited to car washes and foodservice."